Again we’re playing catch up from our last year… Also I figured I’d get all the ugly truths out on the table, there were a few projects where we had to call the professionals in. Even after the fences were up we still couldn’t move into our new home. Why? (Aside from my husband’s head exploding from wedding preparations) No, uglier…We found in the home inspection asbestos in the ceilings. There was white popcorn pretty much everywhere, including the garage…Yes the garage… It was even tricked out with glitter.

We had two options:

1) Encapsulate the ceilings throughout; paint and /or hide it behind drywall.

2) Have it removed professionally.

We opted for the later, as we may want to renovate upwards and punching through two layers of asbestos ridden drywall did not sound appealing. Especially if we are living in the middle of the renovation.

This project may not have been dog centered, but we were considering ALL of the family’s health when we made the decision.

We also made sure the removal would take place before we moved everything in.

In the later choice our renovation budget took a major hit. Less money for all the “pretty,” eye catching projects I had brewing in my head. Also, as I told my friends and family, “I can live with ugly for a bit.”

We were so glad we did! (Poof, glitter begone!) 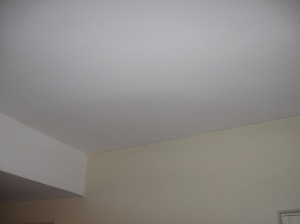 We were actually able to see the curvature and details of our ceiling once the popcorn and glitter cleared!  The ceilings were higher, and highlighted some of the neat mid-century details. 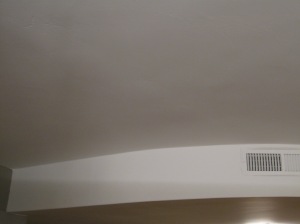 We went with an imperfect smooth texture that mimicked the rest of the plaster smooth walls of our 1950s home. The total cost of asbestos abatement in four rooms, disposal, then retexturing and painting put us back just under $4,000. However from ALL of our seven estimates this was by far the cheapest and best bang for our buck.

We still have one problem to deal with…(Duh, duh duhhh! Cue dramatic music) Our dining room had popcorn ceiling that we couldn’t remove. The previous popcorn had been sprayed directly onto the plaster ceiling, then shaved and painted over. Albeit the asbestos was encapsulated and safe, it still screams ugly! I’ll post much later on how we plan on solving that problem…

Altogether to remove all of it would’ve created a very expensive mess. The professionals recommended we hold off on removing it since the budget could not take another hit…We still have a roof to replace! All in all I can live with ugly…